Star Maze extends my series of visual problem solving challenges and is for iOS and tvOS devices.  Like Slip Sliders, Critter Mates, The Bird Puzzle, The Menagerie and The Hungry Rat, Star Maze is based on a grid where the object is to control a character’s movement to solve a visual challenge.  In Star Maze the characters position can be switched with a blocker and this feature is critical to solving some of the puzzles.  The character can move in any of the four directions, left, down, right or up but only stops when it encounters a wall or a target (star).

Working to solve the Star Maze puzzles helps to develop logical thinking skills because the sequence in which the moves are made effects how many moves it takes to solve the puzzle.  The goal is to collect all of the stars in the least number of moves.  Star Maze differs from Slip Sliders because in Star Maze the character can switch positions with a blocker.  A blocker is a fixed wall in the maze that can only be moved by changing positions with the character.   In the screen shot show above the owl is the character and the black square is the blocker.

Obviously by moving the owl straight up you can capture the first star, but now what?  Moving right and down doesn’t help much, but what about switching the character and the blocker.  Tap the switch icon and now the puzzle board looks like this: 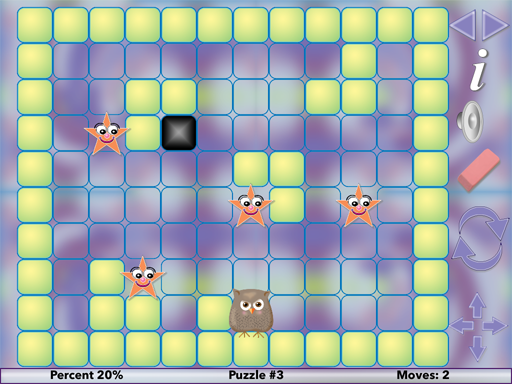 Now by moving straight up again, another star can be captured.

Solving the Star Maze puzzles can be fun and relaxing.  There is an Apple TV version so you can play Star Maze on your big screen TV with the whole family in the comfort of your living room. Star Maze is also available for iOS devices in the iPad family.  Try it out and let me know what you think?

If you like puzzles you might like Star Maze.   For $0.99 you get the iPad and Apple TV versions.  For more information about the Star Maze app, please visit our website. The app is available at iTunes.